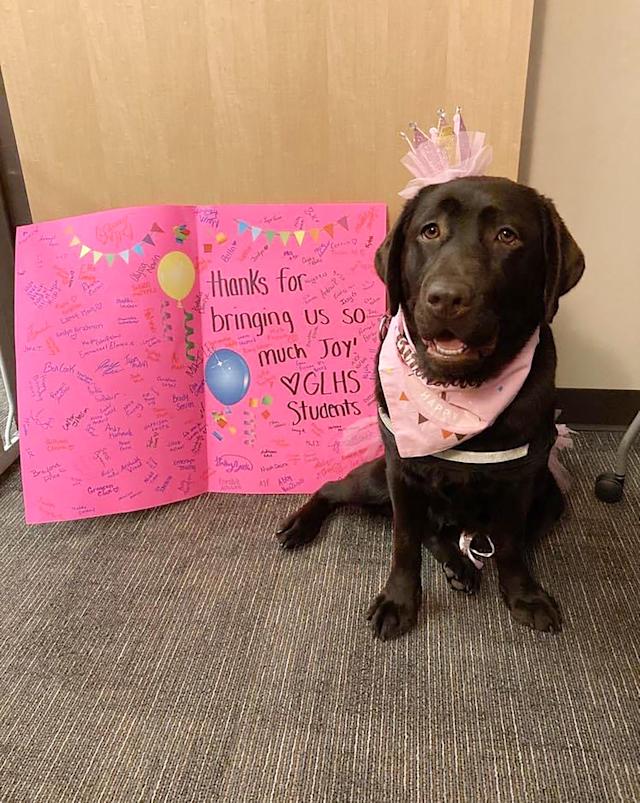 There are many ways to address a youth mental health crisis, including throwing a massive birthday party for a dog named Gravy.

A sweet-natured chocolate Lab, Gravy quickly became a celebrity to students at Grand Ledge High School after she started working there as a therapy dog in September. She showed off tricks in the hallways with her handler, Dean of Students Maria Capra. When students knelt to pet Gravy, she crawled onto their laps.

So when students learned that Gravy’s first birthday fell just before Thanksgiving break, they asked Capra whether they could throw a party.

She said sure, thinking it wouldn’t amount to much. Then the student council put up posters around the school, inviting all of the school’s 1,600 students to attend. Students made a crown and a skirt for Gravy, while others set up a donation drive for the local animal shelter in her honor.

On the big day, “I really didn’t know what to expect,” Capra recalled. “I thought it might be a classroom of 30 kids.

“There were several hundred students in this gymnasium.”

The pandemic has been hard on students in Grand Ledge and across the U.S. Many young people experienced isolation, disruption and the loss of loved ones, leading to an alarming rise in suicide rates  and prompting the American Academy of Pediatrics to declare a national emergency in children’s mental health.

Schools have responded by hiring social workers, expanding their social-emotional learning curricula and, in some cases, purchasing dogs.

Gravy is one of at least a dozen dogs who  have been introduced to students during the pandemic in schools across Michigan.

Districts are buying dogs and covering the costs of their training with their share of Michigan’s $6 billion in federal COVID-19 funds for education.

“He’s kind of like a rock star; when the kids see him coming, they smile,” said Traci Souva, an art teacher at North Huron Schools who handles Chipper, the district’s new golden mountain doodle. “A lot of times the kids will tell Chipper what’s wrong rather than adults, and that’s pretty magical.”

“We wanted to ensure that we were using the funds in a way that was going to make a lasting impact,” said Bill Barnes, assistant superintendent for Academic Services at Grand Ledge Public Schools.

And one more: Research suggests that the presence of a trained dog lowers children’s stress, fosters a positive attitude toward learning, and smooths interactions between students and other children.

The potential downsides of having dogs in schools — especially sanitation, allergies and student fears — are manageable, Barnes said. The new Grand Ledge dogs are highly trained and hypoallergenic, and they are always with a handler who ensures that no student is forced to interact with the dogs.

A dog trained to work in a school typically costs between $10,000 and $15,000. Districts plan to spend at least $182,000 of their COVID-19 funds to either purchase or rent dogs for emotional support, according to spending plans reviewed as part of  a collaborative project involving Chalkbeat, the Detroit Free Press and Bridge Michigan.

That’s a tiny sliver of the federal COVID-19 money available. Districts are spending most of their funds on ventilation improvements to school buildings, hiring additional social workers and counselors, expanding summer school, and providing teacher bonuses.

The court system has long used therapy dogs to ease the nerves of  children giving difficult testimony, said Nikki Brown, a dog trainer, school counselor, and the executive director of Canines for Change, a nonprofit that trains dogs for work in schools.

Since the pandemic, demand for trained dogs in schools “has just exploded,” she said. Over the last year, she said, her organization has recently provided dogs to at least seven districts in Michigan, including Grand Ledge.

“The dogs are highly trained to be in a school environment,” she said. “They are trained to work with kids with autism and kids with emotional issues. They sense stress. By the dogs’ behavior, they might alert a teacher or a counselor to a kid that is maybe struggling emotionally.”

Souva recalled a moment earlier in the school year when Chipper had seemed to sniff out stress.

A child had broken up with his significant other, and Chipper decided to lay right next to his chair,” she said.

Bringing dogs into schools for emotional support is not new to Michigan. Grand Ledge administrators were already considering the idea before the pandemic after visiting Brighton Public Schools, which has had dogs on staff for years. Then COVID-19 hit, and the federal government sent a record amount of money to help schools support students through hard times. The Grand Ledge district decided to put a dog in all eight of its schools.

Staff members applied to handle the dogs — meaning they would train with the dogs, provide a home for them, and manage them during school days.

The dogs were ready to work with students by the time school resumed this fall. The impact was obvious right away, said Jill Ford, a fourth grade teacher in Grand Ledge who handles a goldendoodle named Alfie.

“There were a few students at the beginning of the school year who wouldn’t get out of the car to go into school,” she said. “The counselor would use Alfie to get them out of the car, and they would get a few minutes of Alfie time in the counselor’s office. Now they don’t need her anymore.”

Gravy’s birthday party ranks high on the list of factors that helped Grand Ledge high schoolers get comfortable with their return to in-person learning, Capra said. Gravy has been off work for two weeks after getting spayed, and students ask about her every day.

Said Capra: “I’ve had kids ask me, ‘Can we have a welcome back party for her?’”

$6 billion. That’s how much Michigan schools are receiving from the federal government to help students and staff recover from the pandemic. But it isn’t entirely clear how this unprecedented amount of federal cash is being spent and whether it is having an impact.

Chalkbeat Detroit, the Detroit Free Press and Bridge Michigan have teamed up to find out where the money is going, who is benefiting and whether the money is helping students get back on track academically, emotionally and socially.

What is a dermatologist?

4 ways to foster a workplace culture that champions mental health