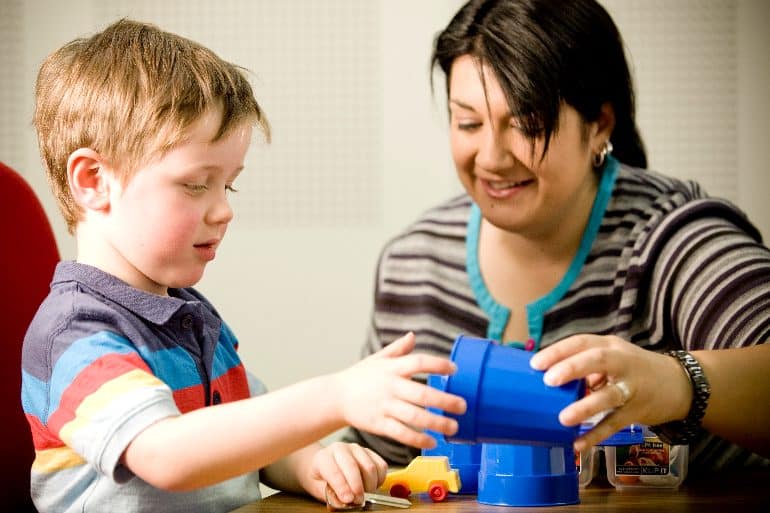 Researchers have found an early screening tool for autism developed by La Trobe University, Australia, researchers—and already used in Australia and 10 other countries—is the world’s most effective, and detects children 3+ years earlier than traditional testing.

Published in JAMA Network Open, the five-year study of over 13,500 Victorian children found the SACS-R to be extremely accurate in identifying very young children on the autism spectrum. Of the infants and toddlers aged 12 to 24 months flagged by the tool, 83% were later diagnosed with autism.

When used alongside a SACS-Preschool check, 96% of children on the autism spectrum were identified by their 3.5 year health check.

Lead researcher, Associate Professor Josephine Barbaro, from La Trobe University’s Olga Tennison Autism Research Centre (OTARC), said the research points to the critical need for the SACS-R and SACS-Preschool to be rolled out across Australia and the world, as part of regular infant health checks.

“Parents are often told to “wait and see” when raising concerns about their child’s development. This means the average age of diagnosis is around four to five, and opportunities for early supports have been missed,” Associate Professor Barbaro said.

“Putting this extremely effective tool in the hands of a trained primary health professional, so that during their routine health checks they are also screening for autism, makes a huge difference to early diagnosis.

“Not only is SACS-R the world’s most effective screening tool, unlike many it can be used within the community on large populations, enabling early identification of very young children across the board,” Associate Professor Barbaro said.

Every Victorian child attending a routine health check at 12, 18 and 24 months is already screened using the SACS-R tool, after the Victorian Government funded state-wide training for maternal and child health nurses in 2019.

The added SACS-Preschool tool can be used at the 3.5-year health check to increase the effectiveness of the identification process—though training for that is not currently funded in Victoria.

“Early autism identification using this tool has already changed the lives of thousands of children and their families around the world,” Professor Dewar said.

“An extraordinary contribution by La Trobe’s autism experts, this new research will likely lead to even more countries adopting the tool and embedding screening programs into their health systems.”

Early diagnosis of autism is critical, as it leads to earlier access to supports, services and therapies. It improves developmental outcomes, increases participation in mainstream schooling, and reduces supports required as children get older.

The accuracy of autism screening tools used in other parts of the world is very limited, including the well-known M-CHAT, which has an accuracy level of just 6% when used in a community-based population. More information on OTARC’s research into autism detection and diagnosis can be found here.

The Social Attention and Communication Surveillance-Revised (SACS-R) and SACS-Preschool (SACS-PR) tools were tested using funds from the Autism CRC and Menzies Foundation.

Developed over 15 years by Associate Professor Barbaro, the tool is used to identify a set of behaviors that are characteristic of children on the spectrum from as young as 11 months old, including infrequent or inconsistent use of:

SACS-R is now used state-wide in Victoria and Tasmania, and training has been completed in New South Wales, Queensland, and South Australia.

Health professionals in ten other countries around the world—including China, Singapore, Poland, Japan, New Zealand, Nepal and Bangladesh—have also been trained in using the tool.

We’re Not Prepared For The Next Pandemic Phase: Dealing With Long COVID